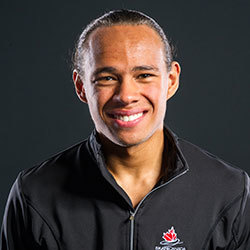 ELLADJ BALDE is a Canadian former competitive figure skater. His mother is from Russia and his dad is from Guinea. He was born in Moscow and immigrated to Montreal at 2 years old. He was on the National Team for Canada for over a decade skating competitively. He speaks three languages fluently: English, French and Russian. Elladj Baldé is a frequent guest performer with ITNY.

Prior to COVID he was doing guest performances on tours all over the world, including Spain, Japan, Switzerland, Korea, and Russia. He is in-demand as a show skater and it has kept him very busy since his retirement from competitive figure skating. While unable to travel due to COVID, he decided to focus on his activism and recently started a non-profit organization called the Figure Skating Diversity and Inclusion Alliance. The organization is dedicated to increasing representation and accessibility to the BIPOC community through many exciting initiatives. While it has been a lot of work, he is very excited about the process they have been making. He has recently started a relationship with the Hockey Diversity Alliance, run by Kim Aliu and Evander Kane, and many other top NHL players.

Balde has had multiple videos go viral on TikTok and Instagram with upwards of 13 million views. These videos have been reposted by the likes of Jada Pinkett Smith, Jennifer Aniston, Complex Magazine, Jesse Reyez, Sony Music, Saweetie, Dan Levy, and many more.

Balde’s goal is to make figure skating cool again and bring it back into the mainstream culture. He wants to inspire young boys to pursue their passion and not be afraid to tap into their artistic and emotional side. He wants young BIPOC skaters to see him and feel like there is a place for them in this sport. Lastly, he wants to show all figure skaters that beyond the competitions, this sport is an art form that anyone can use to express oneself.